WHERE IN THE WORLD?

This half term we are going on an adventure around the world. We will be following Michael on his journey on his boat and reaching the last destination. Kensuke’s Kingdom. We will be looking at the different countries that he visits, all the beautiful views he see’s and amazing animals he meets. Come with us on our exciting adventure!

On our first day back, we turned our room into an around the world adventure. We created a map of the island Michael gets stranded on, turned our windows into a jungle and created our own Papier Mache globes. The children were fully immersed and are looking forward to our new topic. Take a look at our beautiful classroom and all of the fun things we have created.

Whilst reading the story, we realised that not everyone was as excited about going on the trip as dad was. We decided that we needed to understand how each character in the book felt about this trip! We invited the characters from the book into our classroom and decided to hot seat them. We asked them a variety of open ended questions so that we could get a real feel for how each of them felt. Dad was the most excited and gran was the least excited as she felt she would really miss the whole family! We then used this to write a diary in the role of the characters to get across our feelings and emotions.

As we are looking at Kensuke’s kingdom, one of Michael’s homework projects whilst he sails around the world is to find different animals and be able to explain all about them. The children decided that they were going to pretend to be Michael and complete this homework project. The children were given facts around the room which they then had to re write into a Non-Chronological report. The children loved finding out about animals at sea, in South Africa and Australia.

Whilst sailing around the world we decided that we wanted to look at countries and continents. The children first labelled the continents on a map using an Atlas. Then once we were confident with this, we went outside to draw our own world map on the playground. The children tried really hard to get the shapes of the continents accurate.

After we looked at the continents, we decided to focus in on Australia. We chose this one first as it is a continent AND a country! The children looked at the physical and human features of Australia and went around the room to find out these facts. The children then create some information posters about what they had found out.

We continued to read the rest of the book. We noticed that Michael had written a logbook. We discussed what a logbook was and why someone would want to write one. I gave the children a picture of one of the activities that they might have done whilst sailing on the boat and asked them to annotate what they got up to and how they might be feeling. The children then wrote a fantastic log book entry about their section of travelling.

Sailing on the boat 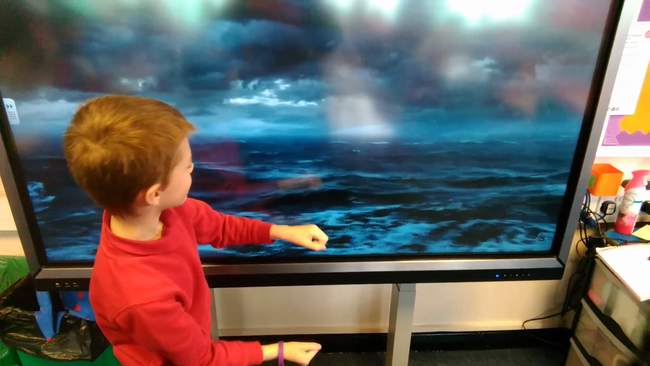 This half term, due to the beautiful weather, we decided to have an outdoor writing lesson. We went outside and turned the playground into Kensuke’s island. We saw all the different parts, what you might eat, what you might smell and activities you might get up to. The children then wrote down on their sheets all the way their senses could be used. From this we wrote a beautiful setting description about the island. It felt like we were there on our holidays!

Year 5 decided to invite the parents and carers into school to help us with our Geography lesson. We went orienteering and then had a quiz about around the world. The orienteering questions spelt out a specific continent that they had to find. All the adults and children had a fantastic afternoon and were very competitive!

In writing, we have tried to widen our vocabulary. We were about to write a character description about Kensuke but realised that we were using words such as happy, sad, bad, kind. We wanted to write more maturely. The children completed a burn to learn where they had to use a thesaurus to write more improved adjectives.

As a class we looked at the different pictures of the deserted island. We looked at what Michael and Kensuke might have got up to whilst on the island. The children also read the book to find more information out. We decided to write a diary entry in the perspective of Michael and his days on the island. We talked about how Michael might be feeling. Could he secretly be enjoying the time on the island even though he misses his family?

In our music this half term, we have been looking at 90’s hip hop. We have looked at the fresh prince of Bel Air. The children absolutely love this song and are fantastic at rapping it. 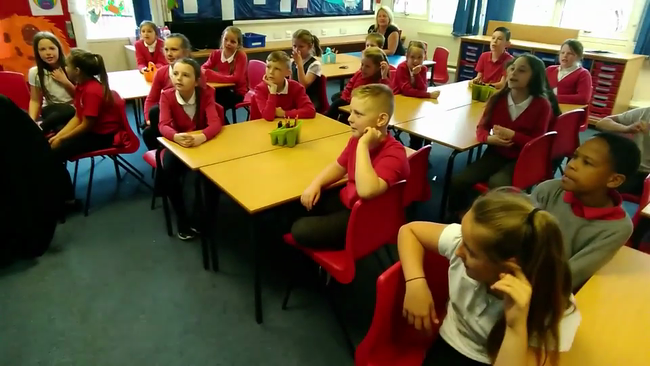 The children have been learning all about biomes. We found out that there are around 7 major biomes in the world. The children completed some research about the biomes and then had a go at creating them themselves. Take a look at some of our brilliant creations!

For the first part of the half term, we have been looking at angles, translating shapes and reflecting them. We have found it very tricky using all the different equipment however by the end of the topic we were superb at naming all the angles, finding missing angles and being able to work out problems. Children then used these skills to describe reflections and translations.