We have begun our new learning adventure all about DINOSAURS!!

We had a very busy creative context day on Monday where we made lots of different decorations for our classroom, including; dinosaur eggs, dinosaur balloons, paper plate dinosaurs, collage dinosaurs and paper chains. We even set up a dinosaur spotting role play area!

We received a letter from a mummy dino asking us to look after one of her eggs as she didn’t have enough room in her nest for it! The children found the egg outside in the Reception playground and we discussed how the egg should be looked after, the children wrote their ideas down and some children even thought of a question they would like to ask the egg. Look at their fabulous work!

The children worked in groups and looked at raw eggs, boiled eggs and scrambled eggs. The children discussed how the eggs looked and some children tasted the eggs and described their taste.

In Maths the children have been learning about the number 10, they have learnt that it can be represented in different ways using different resources and they showed off their mathematical knowledge and reasoning to the other children in their group.

The children had the opportunity to use the school laptop and play Buried Treasure to practise their reading skills. They had to use the mouse pad to move the cursor around and then click and drag to move coins to the treasure chest or the bin depending on whether the word was a real word or a fake word.

This week, we have been learning about tyrannosaurus rex and diplodocus. We used the internet and different dinosaur books to find out information about the different dinosaurs. We wrote some interesting facts and put them onto a working wall about dinosaurs. Some children wrote their own facts and added them to the wall. The children then thought carefully about something they would like to ask a dinosaur if it came into our classroom.

The children have made and painted their own paper mache dinosaur eggs. They covered a balloon in and PVA glue mixture and then layered strips of newspaper on the top. When the newspaper had dried, the children decorated their egg, they talked about what kind of dinosaur might come out of the egg and why.

“We need to paint it yellow as T-Rex’s are yellow in the egg.”

“I think it will be purple with white spots.”

The children used their observational skills to look carefully at some dead and living daffodils. The children talked about the differences between the two plants, why they thought the daffodils had died and what they can do to look after flowers.

In maths the children have been learning about the number 11. They counted up to and down from number 11. They have been introduced to subtraction and were able to use resources to find out the answer to some subtraction questions. The children also had some dinosaur nests with numerals on them, they had to put the correct number of dinosaurs into each nest.

It has been a very exciting week in Reception; we have celebrated Pancake Day by tasting pancakes and World Book Day by decorating potatoes. 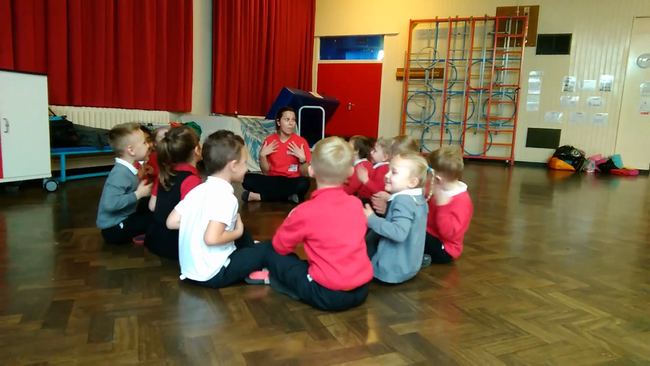 The children have learnt about some more dinosaurs this week; stegosaurus and pterodactyl, they used information books and the internet to find out lots of interesting facts.

All the children contributed to a dinosaur factfile about: T-Rex, diplodocus, stegosaurus and pterodactyl.

The children have used their observational skills to draw a pencil outline of their chosen dinosaur, whilst they were drawing, the children talked about the different dinosaurs. The children also created their own dinosaur fossils using salt dough.

The children used the Beebots this week. They had the chance to investigate how to operate them and then they were challenged to program the Beebot to catch a dinosaur. They used a Beebot mat to try and work out how many spaces the Beebot needed to move to catch the different dinosaurs.

In Maths the children have been learning about number 12, they have learnt that it is made up of one 10 and 2 1’s. The children received a letter from Dinosaur Zoo asking for their help in sharing out the dinosaur food equally between different numbers of dinosaurs. They worked really hard to make sure none of the dinosaurs went hungry!

During our PE lesson this week, we went hunting for Golden Eggs which were hidden around the playground. We had to work in teams to find the most eggs. We also played a game of Simon Says and had to listen hard to make sure we followed the right instructions. 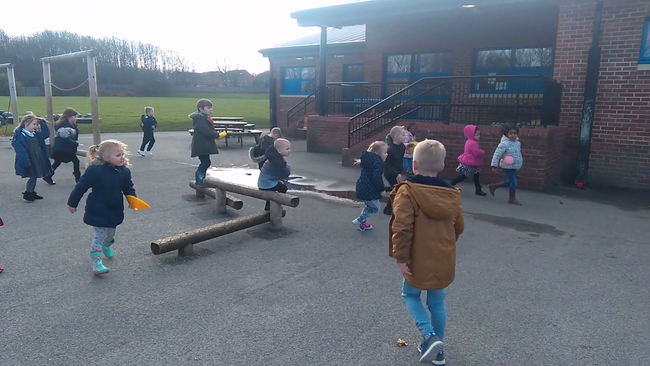 The children have been thinking like authors this week; they have been set the challenge of writing their own dinosaur story. We have talked about how a story needs a character, a setting, a problem and a solution. The children were very keen to share their ideas on the carpet and they came up with their very own class dinosaur adventure.

'Once upon a time, there was a diplodocus. He went to the beach and met a shark. They became friends.'

In maths, the children have learnt about the number 13, they have learnt that it is can be made up using different combinations of numbers. They have learnt that the 1 represents one 10 and the 3 represents three ones. It has been lovely to see the children applying this knowledge to bigger teen numbers. The children have worked hard to develop their sharing skills, they had to help mummy dinosaur to work out how many eggs she could put into her 2 nests to make sure that they were shared evenly.

The children have used their observational skills to create a dinosaur using 2D shapes. They had to look carefully at the template and find the correct shapes from a selection. Once they were happy with their creation, they used the tablet to take a photograph.

"Sharing means you need to get the same number in."

We had a very exciting visitor at school this week….. Tyrannosaurus Rex!! We learnt lots of interesting information about T-Rex such as how it stands, how it eats, how fast, or slowly, it moves and how it is not thought to have been a solitary creature. The children were very excited to see how the T-Rex moved around the room and some children even got the chance to get close to the dinosaur!! 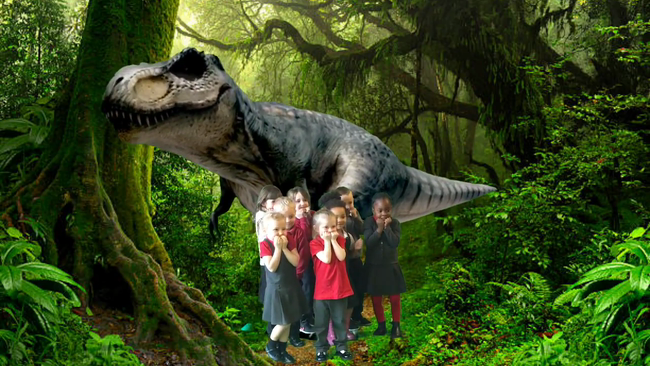 This week, we have been writing our own dinosaur adventure stories. We worked as a class to create a selection of ideas for our characters, settings, problems and solutions and then we used these ideas to create our own story.

The children worked very hard to come up with some fantastic ideas for their stories.

In maths the children have learnt about the number 14, they have learnt how it can be represented in different ways and they have also begun to add two single digit numbers together.

The children have worked very hard this week to make their own dinosaur nests which we sold at our ‘Dinosaur Habitat Museum.’

We had our Dinosaur Habitat Museum, it was lovely to see all the children’s hard work displayed. Take a look at some of the wonderful habitats!