All Around the World!

The books we are using throughout our adventure:

The children will be:

You can help your child by:

A Trip to Istanbul!

This week we began our new adventure. We met out new Story character Tom and we following him to Istanbul to meet his Grandma. She had sent us a postcard saying that she was going on a trip around the world and she asked if we would like to join her. She told us that she had bought a magic carpet and that she was going to fly to lots of different countries. Before we could join her on the adventure we all needed to create our own passports.

After we had created our passports, Miss Procter handed out our plane tickets and off we went. First we met up with Grandma, and then we visited lots of different places in Istanbul. We went to the Sea Life Center, to the Theme Park, to the Mosque, to the market, on a hot air balloon ride and finally we went for a trip to the beach where we went snorkeling and build sand castles. we had such a good day that we decided to write a postcard home.

Once we had returned from our trip to Istanbul, we decided to look at bit closer to home and we studied the city of Leeds. We found where Leeds was on a map and we looked at the different things that we could see located on the map. we sorted these things under two headings... human features and physical features. We learnt that human features are things that are man-made by humans (e.g. bridges and roads) and that physical features are naturally formed (e.g. rivers and hills). The children really loved using the maps to create their two lists.

Later in the week the children are going to using their knowledge of Leeds to write an advert persuading people to come and visit the city.

Materials from around the world...

This week the children have been investigating and evaluating different materials. They have also been looking at how materials are made in the UK and how this differs from other countries around the world. The children sorted a range of materials into different categories related to how they had been made e.g. weaved, knitted or felted. A technique that the children looked closely at was an Indian weaving technique. This is because we are going to be weaving our own magic carpets! Great work.

This week in geography the children have been researching the Leeds and Mexico and they have been comparing the geographical similarities and differences (e.g. weather and location). The children worked in small groups to research their chosen area and they then presented the information on a mind map with the help of an adult. The children identified a range of human and physical features in both areas and they used a world map to look at where each area was in relation to the rest of the world.

Following on from this the children then wrote a piece of non-fiction writing using their research from their geography lesson. The children thought hard about the facts that they wanted to include and they ensured that the had orally composed their sentences before writing.

Weaving practice for our carpets...

This week the children have been learning how to create a weaving pattern using a paper template. First, the children had to read the instructions and then they followed each step carefully. They cut across the lines to create the holes to weave through and then the used the under, over technique to weave the paper strips through the holes. The children thought about patterns, colour and design when weaving their paper strips. Once they were completed, the children glued all the edges down to ensure that their weaving stayed in place.

This week the children received a phone call from Grandma saying that she has headed westward to the land of Mexico. We found out that she had been invited to attend a party at the National Palace where has had been asked to talk about her magic carpet and how it works. The children decided to take on the role of the important people who wrote the invitations and they sent them to Grandma requesting her to visit.

Once we had sent Grandma her invitation we decide to visit Mexico ourselves. We went on an Imagineering journey and pretending that we were walking down a busy street in the city. We used our senses to describe what we could hear, see, smell, taste and touch. The children then wrote their own setting descriptions and they thought hard about what WOW words they could include within their writing.

This week Grandma has visited China where she bought 4 paper lanterns. When she got there she sent us an email with videos of people celebrate and preparing for Chinese New Year. In order to learn more about the celebration, we started by reading the story 'The Great Race' and we learnt the reason that each year is named after an animal. Whilst celebrating, we have been busy with lots of creative activities, including attempting Chinese writing, making lanterns, and we even made our own yummy Chinese noodles.

After this we produced some amazing writing about how people prepare and celebrate Chinese New Year and we also wrote instructions for how we made our paper lanterns. Well done!

How can we be responsible?

This week in PHSE the children have been learning about how to be responsible. First of all we spoke about what ‘being responsible’ means and then we created a mind map together as a class and wrote all of the different things that we can do to be responsible.

Around the world artist...

This week the children have been learning about a famous artist called Henry Villierme, who paints using small coloured dots. This technique is called Pointillism. First, the children had to draw their outline and then they used small cotton buds and different colours to create some beautiful art work of trees in the sky. Well done!

This week the children have been designing their own magic carpets ready to begin making next week. The children had to think about the pattern and the colours that they were going to use and they also had to write a list of the materials that they will need. We found it tricky at first when making sure that the pattern repeats itself the whole way through the carpet but we used the lines to count down the right number of rows for each colour and in the end we produced some really amazing work!

Similarities and Differences between Mexico and the UK...

This week the children have been looking even more closely into the UK and Mexico. This week the children have focused on the geographical similarities and differences between the two countries. They looked closely at lots of aerial photographs and they identified lots of human and physical features in each country. The children then compared these and we learnt that some features were the same in both countries but we also learnt that Mexico has volcanos, deserts and canyons which we don't have in the UK. 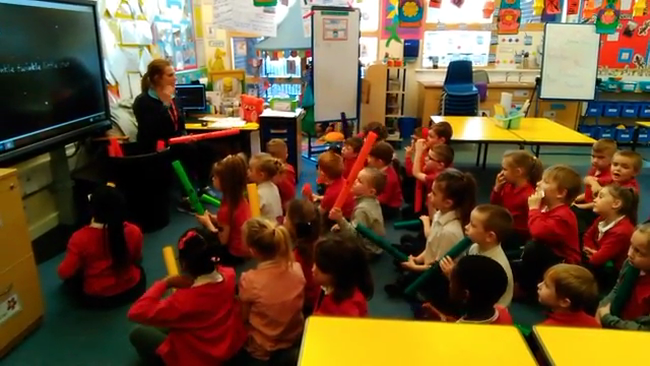 Once the children had helped the snail write his advert they then started to think about the different animals in the animal kingdom that might be appropriate to carry the snail all the way around the world. The children started by looking at a range of animals and they have been classifying them into the correct animal group. We have been learning about amphibians, reptiles, mammals fish, birds and insects. The children looked carefully at the features of each animal and they discussed as group to decide which classification hoop they were going to place each animal in.

Once we had classified the animals we decided that a mammal would be the best type of animal to take the snail around the world as they are strong but we also thought it would be useful if they could swim. The children decided that the perfect animal would be a Humpack Whale. The children carried out research on a Humpback whale and they created a non-chronological report to present to the snail.

After helping the snail embark on his adventure, grandam returned safely home. Once she was at home we helped her write a letter to her best friend Pam telling her all about her amazing adventure around the world. The children produced some amazing writing!

This week the children have been learning to identify when it is easy and difficult to show friendship and explore when Jesus may have found it difficult. The children used Abbey Owl to discuss things that a good friend does and does not do. The children the wrote their ideas down on a post it note and we sorted them into the correct category on the IWB. We are going to try really hard this week to ensure that we being a good friend to everyone in our class.

After creating designs last week, this week the children have been using a cardboard loom to weave their own magic carpet. They learnt how to cast on the loom and change the thread colour. They carefully weaved the thread to create a piece of material. The children selected colours from a range of wool to create their own unique pattern. They worked collaboratively and showed great perseverance. Well done!

This week the have been learning how to sort using a given criteria. The children started by looking at a range of 2D shapes and they discussed the different ways these shapes could be sorted. The children then chose two of their own categories to sort their own set of shapes into (for example- shapes that are red and shapes with only straight edges). Once the children had sorted their shapes they were given a 2do to complete on the laptops where the skills of sorting was embedded.

This week in RE the children have been learning to identify when it is easy and difficult to show friendship and we have explored when Jesus may have found it difficult. The children started by reading bible stories and watching animations of Jesus with his friends. The children summarised each story and we displayed their notes for them to see. The children discussed how Jesus showed people how to be a good friend and they shared their ideas on how Jesus is a good friend to the people in his life. The children also thought about the fact that Jesus was human and that he might not have always been friends with everyone but he tried his hardest as he was viewed as the son of god. Super discussions year 1!

Our Geographical Walk to the Nature Reserve!

This week the children have been on a geographical walk to find a range of human and physical features in the local environment. We had lots of fun and we learnt lots about the things in our local community.