We would like to welcome all our children old and new to our Nursery. We are very excited about all the new children that have joined our school and we know that all the children are looking forward to making lots of new friends.

This half term we are going to be settling in and finding out what it is like in Nursery and the routines we have each day. Throughout this half term we will be exploring all of the lovely resources we have that help us to learn.

We’re Going on a Bear Hunt! 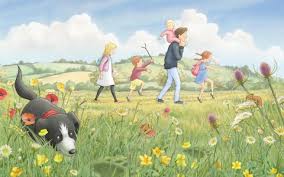 Books we will be reading this half term:

You can help at home by:

This week the children have been listening to the story Can't You Sleep Little Bear? They had lots of fun working together with their friends to build their very own bear dens using our large construction poles and lots of material. The children then explored their dark den using a range of torches.

The children thought about how they could help little bear. They decided to put lanterns in all different places to see if that helped little bear to go to sleep! To do this they had to listen to the position of where the lantern needed to be and then followed the instruction.

The children then made their own lanterns so that they didn't feel scared of the dark either. They did this by practising their scissor skills to cut out a lantern and choose their own coloured light to put inside it!

Roald Dahl Day. The children had lots of fun dressing up as different characters from Roald Dahl books and finding out all about the famous author.

Week 3 - Who's been sitting in my chair?

This week the children were horrified to find that the home corner had been trashed! A chair had been broken and the house was very messy. The children found clues that led them to believe that the house belonged to the Three Bears. They found a big, medium and small chair, bowl, spoon and cup in the cottage. They also found some shoes, a blue hair ribbon and a blue dress near the crime scene. This made them think that Goldilocks might have been responsible...

The children received a book from the police. It was the story of Goldilocks and the Three Bears. They had lots of fun joining in with the repetitive story words in different voices for each of the bears.

They also enjoyed listening to the song 'When Goldilocks went to the house of the bears' using some simple actions as they sang. Follow the link below to sing along!

Breakfast is ready! The children thought very carefully about which size bowl, spoon, and cup each of the bears would need as they set the table ready for their porridge. Some children even used the words big, medium and small to describe each size!

Who's been eating my porridge? This week the children have been making their very own porridge. It was very tasty!

Wanted! The children chose to build a jail so that when the police find Goldilocks they can lock her up in prison! The children put a teddy bear inside to check that the jail would be big enough for Goldilocks to fit into. Excellent spacial awareness nursery!

Week 4 - A house fit for a bear. The children decided to make their own houses for the bears in the creative area using a range of junk model materials. Some of the children even stuck pictures of the bears inside and on the front of their houses. Well done everyone!

The children thought about Daddy bear's hard bed and Mummy bear's soft bed in the story. They then felt a range of objects and thought carefully about whether they were hard or soft. The children then sorted them into two groups according to their texture.

The children then used the puppets and props from the story of Goldilocks and the Three Bears to retell the story themselves. Well done Nursery!

Week 5 - This week the children received an email that whilst the police have been looking for Goldilocks, the Three Bears have been very naughty too!

The children thought of all of the different things they might have done and were shocked when the police sent their top secret file 'Beware of the Bears' for the children to read!

The children made wanted posters of the bears to help the police with their investigation and some children even thought of some describing words to say what they looked like!

They then tested different material coats to see which one would keep everyone dry as all of the other bears in the woods join the search to look for the naughty bears!

Testing which coats are waterproof

Directing the police to Goldilocks and the Three Bears

The children programmed our 'Beebot' police officers to try and help them catch Goldilocks and the Three Bears. They thought carefully about which buttons they needed to press to help the police officers to move forwards and to make a turn to catch the criminals.
Top
Cookie information
Cookie Notice